This article was published in The Daily Times.  It truly does sum up my sentiment towards politics in Pakistan. I have no doubt that my generation will carry us forward with a vibrant and dynamic economy, and a population that is free of corruption and has ample access to justice along with the freedom of religion to practice and preach.

Politics in Pakistan mesmerize me. Not only does one enjoy the daily dose of rhetoric that is spewed from the mouths of our beloved politicians, but the one track mind of those in and out of government baffles the mind. Politics in Pakistan, much like the political parties themselves seem to be more inclined towards a personality than an ideology.  Nawaz Sharif, Altaf Hussain and Asif Zardari seem to be controlling the present and future of 170 million Pakistanis. What is ironic of these three distinguished gentlemen is the immense power they control. Nawaz Sharif, already a two-time Prime Minister – failed miserably on both occasions, Altaf Hussain – a self exiled leader living in London and Asif Zardari – the current President of Pakistan seems to be holding on to his seat with every bit of strength his party can muster. But why has it lead to a power struggle amongst these political leaders when thousands of Pakistani civilians and soldiers have died over the last few years? Why are we still playing the dirty political games of the past, when history has taught us to do better?

Furthermore, none of the three main political players can advocate the issues I have outlined. One is uneducated, the other is too religious and the third is downright corrupt. They surely cannot practice what they preach, so how have they managed to fool a nation of 170 million people and gained the ability to even vie for the control of our government? It truly baffles the mind. But with the determination that has kept us alive for the past 62 years, surely we will be able to overcome our current difficulties. It is only fair and critical that we start exercising and demanding our civil rights. It is the only way we can hold our government accountable. We must fight for our right to education, our right to freedom of religion and our right to a corrupt-free society. Anything short of this would truly be a sell out on our behalf!

It is highly unfortunate that the two largest political parties in Pakistan are currently vying for the federal government, while the very nation they wish to govern is in flames. Do not for a second believe that I am being melodramatic with the word “flame”. From power outages to inflation and from the target killings in Karachi to the drone strikes in the North; we are on a path of destruction. But here I am – the eternal optimist – believing that a country which was born out of a long and hard fought struggle can make it through the difficult times again. However, we will only be able to walk through it all with our heads held high, if we review our past and yearn not to repeat them again.

Education is vital to our survival. Any ounce of resource that our government has should be provided in funding the education of millions of children. This resource can either be found in the shape of a $7.5 billion aid package or the privatization of an airline that long ago lost its charm and aura. Thousands of young Pakistanis leave the land of the pure in the blink of an eye for their higher education. They leave with optimism and sanguinity. How many students return with the same emotions and feelings? Not a whole lot. Many return due to the non-availability of work permits, not because they are attracted to the job market in Pakistan. This needs to change, and an investment in education is the only solution forward.

The religious right-wing needs to yield its toxic influence and allow for positive criticism and open mindedness to grow. Freedom of religion needs to be practiced and rehearsed according to the same laws preached by the Prophet (PBUH). Unfortunately we as a nation have strayed so far away from the core of Islam that we have forgotten the true meaning of practicing Islam. Mind you, this is not the same core that various factions such as the Salafis or Wahabis are trying to attain. This is a core that allows for dissenting views, one that allows for questions to arise without having to face the wrath of lashes or stoning. Islam is a religion that was never spread by the sword. It is time we dump the practice of using religion as a weapon, and turn to using knowledge and literacy as a mode of advancement. Preaching a militant form of religion is not the route we should undertake in order to secure freedom. We surely won’t be able to annex Kashmir by practicing such tactics. 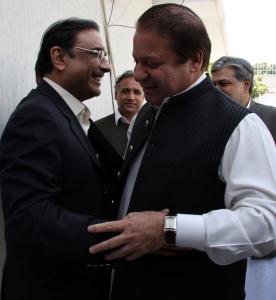 Corruption is common. From the driver putting a few extra hundred rupees on the petrol bill to the MNA putting a few extra lakhs on his projects to the Federal Minister putting a few extra crores to his budget. This is a menace that has plagued our society for decades and at the alarming rate we are witnessing today, does not seem to be stopping anytime soon. I wouldn’t be surprised if the level of corruption is only at the lower level since it is almost near impossible to have a corruption clean society. I am more astonished at the privileged elite who pocket millions and siphon the money to off-shore accounts. There is just so much money these individuals have gathered over the years that I can guarantee you, they won’t even be able to spend it all in their lifetime, even if they tried too! Corruption in Pakistan even goes against the basic law of diminishing marginal utility. The more corruption is consumed, the more satisfaction is seemed to be derived. A stronger judiciary and a National Accountability Bureau (NAB) that does not have a political agenda could surely help in bringing many corrupt individuals to the front and place them behind bars!

The current crop of “political leaders need to stop running Pakistan and its institutions like personal fiefdoms” says Ijlal Naqvi, an Islamabad based PhD Candidate in Sociology. He terms such behavior as profoundly undemocratic as they “encourage no debate, hide what they are doing, and refuse to be accountable to the law”. With an independent media representing the emerging voice of the public sentiment, we may as well be seeing the change us Pakistanis long for.

6 responses to “Mesmerization of Pakistani politics”